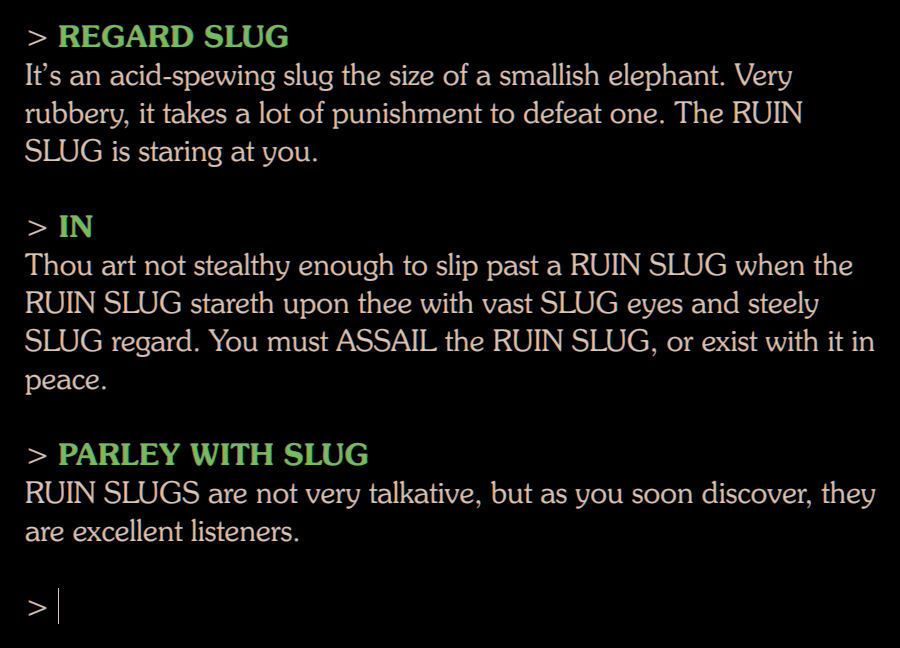 In the cruel kingdoms north of the Viraxian Empire, a barbarian seeks treasure - and vengeance! Having escaped the clutches of the Slaver King, he has vowed to pillage the wealth of the kingdom ... then bring it to its knees. YOU are this barbarian. Weakened by your ordeal as a slave, wandering an unfamiliar realm filled with danger, you must use cunning, savagery, and something approximating English syntax to regain thy might, rally an army of friends to your cause, do repeated business with a Delicate Doxy, and do deadly violence unto the Slaver King!

Fans of Encounter Critical rejoice! The long-lost classic of text-adventure gaming is restored at last to a glory it never knew! Thrill to the savagery of the Sky Piranha! Marvel at the pathos of a love-struck Frankenstein! Mutate from exposure to unmodulated phasic radiation! Wield a rune-carved peg-leg Dwarf in your hand, and crush a wicked kingdom beneath your sandaled tread!

Mere words cannot contain a game made entirely of text! To understand the savage beauty of Treasures of a Slaver's Kingdom, it's best to just download it (below)! The download includes the game itself, plus the spiffy documentation and a folder full of extras (including yet more PDFs, an alternate all-in-one game file, and even a kind of kit for those in the mood to write a sequel)! ToaSK runs on virtually any modern device (Windows, Mac, Linux, iOS, Android and more) using the z-machine program of your choice (see below). Snag it, fire it up, and step into another chapter in the saga of Encounter Critical!

Groove to the Mighty Z-Machine!

ToaSK is a z-machine game (a format devised by Infocom for the Zork games back in the slightly more real 1970s). If you don't have a z-machine player installed,  click here for the free software you'll need to quest into the Slaver Kingdoms in a twisted (and sometimes very naughty) interactive EC adventure.

Some Specs and Details

Fair warning: if you consider yourself an IF enthusiast, you should just back away slowly, now, and forget this game exists. It isn't for you, and it responds dangerously to sudden movements. Never break eye contact until you're ready to run, then run, run like the wind, and don't look back! Really. But if you're the kind to ignore such warnings with a roguish grin, a swirl of your cloak, and a defiant bite into your slightly dry dinner roll, here's the basic rundown:

Finally, and it's important to stress this: this is Encounter Critical, which means it's designed to be a very good game while providing a thrill-ride simulation of a very, very bad one. If that sounds like a stupid idea, well, yes. Yes it is. And if that sounds great: welcome, friend, to the world of EC. 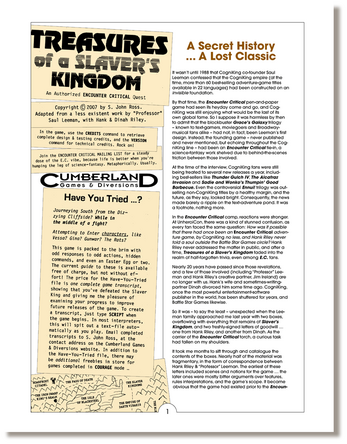 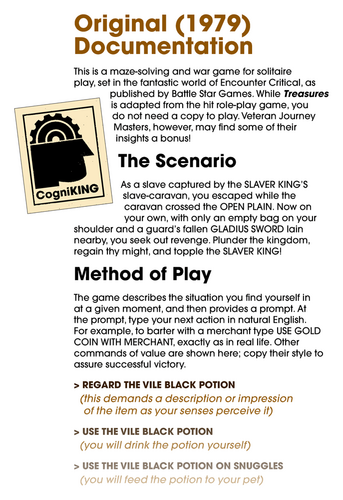 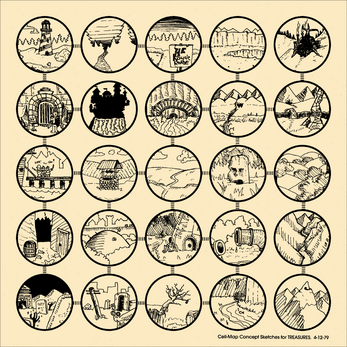 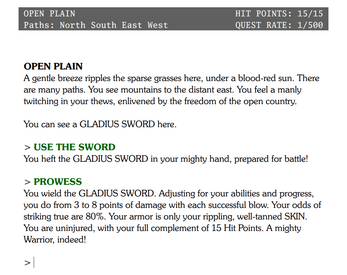 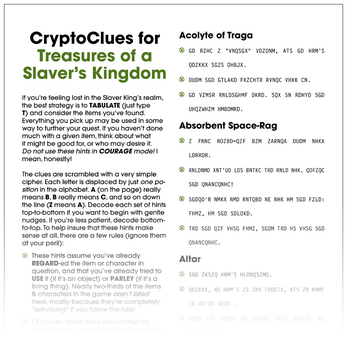